Not long after I put “complete triathlon” on my bucket list did I have the bright idea to search for upcoming races. My new King County library card and borrowed copy of Triathlete added a bit of fuel to the fire. I quickly discovered the Washington Triathlon Event Calendar and scrolled down the list. Lo and behold, the Lake Meridian Triathlon, taking place on Sunday August 26th, is almost literally outside my front door. It also happens to be the day after my 30th birthday. I couldn’t resist.
In the two weeks that I’ve been in the area, I’ve biked END_OF_DOCUMENT_TOKEN_TO_BE_REPLACED

Reason #87 why I love New Zealand:
Racing along the country roads towards Queenstown at 2am listening to dub step in a car with four new couch surfing friends and a small dog.

Just minutes after midnight I stepped out into the Dunedin night air, walked down the hill and stood on the corner of South Rd. A moment later a car sped around the corner, headlights headed straight for me, and stopped just before where I was standing. Alex opened the boot and I squished my backpack in. Off we went into the night.
END_OF_DOCUMENT_TOKEN_TO_BE_REPLACED

Tonight I decided to call it an early Friday night. My mind wanted to go out partying to songs mixed by crazy DJs and meet the new face of the town but my body has other plans. While my leg is feeling better it isn’t fully recovered and on my flight today I was having some odd pains in my hip joints. I’ve been awake since about 6am, my mind trying to get ready for my trip back to the mountains.
I am staying at the Reavers Lodge again, with an even nicer room than last time. I have a TV (only 3 channels, and currently trying to watch Letterman with horrible reception, so I guess 3.5 channels), a double bed, fridge, kettle, assortment of teas, and plenty of closet space to unpack my suitcase!
I’ve had a rather productive day. I made some new friends and have plans for Halloween, scoped out an ex-rental bike I may buy, tried a seafood pie from Fergbakery (9 out of 10), had a beer at Cowboy bar, and caught up with some friends. I have plans for the weekend and look forward to updating my travel journal when my body and mind feel more energetic!

This afternoon I met Sam, a couch surfer and Auckland local who lives on the North Shore. Though it was pouring rain in the city the clouds quickly passed. As we crossed the Harbour Bridge and entered the rural fields of North Auckland the rain let up. A world of farmland, cows and bright green landscape surrounded me. I felt a bit more at ease, and liberated from my urban fortress!

Our first stop was Snow Planet, an indoor ski field. I took photos left and right; there in the middle of no where on a hill was a boxy white structure housing a wonderful man-made slope with a magic carpet, two poma lifts, a terrain park and all the usual alpine lodge amenities such as rentals, a ski shop and of course a pub with a toasty fireplace!

Our second stop was the little Bohemian village of Puhoi. We drove past the Bohemian museum, the library, the kayak rental, and parked at the Puhoi hotel and pub. A true locals pub, every inch of wall and ceiling was decorated with memorebelia – mostly various paper currency and old ID cards. We enjoyed a round of Bohemian Draught, a light lager style beer, as the sun came out overhead. Puhoi is also known for its regional cheeses and Feijoa sparkling wine.

Before taking me to meet the bus back to Auckland Sam showed me where the hot pools are (a commercial pool with waterslides and such) and some of the beautiful coastline. I love the little nook and cranny beaches along the suburbs. It reminds me of the freedom and serenity of local San Diego beaches.

We had intended to arrive in time to catch the 3:45pm ferry from the peninsula, but were running a bit late. I had to transfer to a different bus in Silverdale, and the ride took me about an hour and cost ten dollars. The trip was well worth it though not as scenic as the ferry would have been. As luck would have it, Hobson St was closed when the bus arrived back to the city and the closest stop to home was right at the corner of Victoria Park.

On my way back on the bus Glen had invited me to join him, Josh and Tom at the Taste of New Zealand Food Festival in Victoria Park, and seeing as how I arrived right outside the park at 5:18pm, I saw it as a sign that I should check it out!

The admission price of $30 was a bit steep, but there were far more samples than I had even imagined at such an event! I began at the cupcake stand, conveniently located right at the entrance, and worked my way around to yoghurt, flavored nuts and spices, Lemoncello, and around the corner to Moa beer.

My next destination was the Whiskey tent where they had a Scotch tasting presentation. The Ardmore and Highland Park were my favorites, the latter having a sweet bourbon style taste. We also had Famous Grouse, which wasn’t quite as smooth, and Laphroaig, which apparently is an acquired taste and supposedly has hints of ocean and salt water.

I met up with Glen, Josh and Tom and we delved into the bulk of the samples; hummus and dips, lamb, beef, chili sauces, sausages, sweets, kumara vodka, Stolen rum, cheeses and wines from countless vineyards. It took us the full four hours to explore everything, including the display of modern kitchen appliances and layouts, as well as a kiosk with Singapore Airlines’ business class seats.

Unlimited tastings were included in the entry fee, but there is also the option to purchase crowns, the unit of currency when purchasing cocktails, glasses of wine and beer, and specialty dishes made up by chefs from various local restaurants. I decided to forego the paid tastings and filled up on a wide variety of other foods! The soft cheeses and tender beef and lamb and spicy sausages were by far my favorites! I was impressed with the novelty of kumara vodka, though the taste was not as appealing. Glen decided to buy a pizza-maker, a round sandwich-maker-like appliance which makes pizzas in just 5 minutes so hopefully we will be around at his place for a pizza party in the near future! Personally the only purchase I made at the food and beverage festival was a $2 bottle of sparkling artesian water. It may have been Tom’s comment about the sad looks on the vendors’ faces from their lack of popularity, surrounded by such tasty samples, but the cool, fresh water was a fine finish to the evening.

The quality of food and beverage, as well as the music and ambiance, well justifies the $30 price tag. Everything was so delicious – not to mention the free-flowing spirits and wine – I would consider going again! The evening sessions of the Taste of New Zealand food festival are from 5:30-9:30pm Wednesday 19 October until Saturday 22 October. If you are in Auckland I highly recommend it!

I spent a few days in Queenstown catching up with friends and doing what I love best – dancing!

A huge thank-you to Paula and Graham who welcomed me back to Queenstown. I enjoyed the company of their lovely family and a yummy pumpkin lasagna! They also referred me to the Reavers Lodge, where I stayed for three nights.

A lovely Dorm Room with Ensuite

Reavers Lodge is a newly renovated hostel on the North end of Queenstown just up Hamilton Rd. Todd, the owner, set me up with a beautiful 4-bed dorm with ensuite and fridge.

The hostel has a hot tub in the courtyard, a clean kitchen and common area, and views of the town. It’s also a quick 10 minute walk (or 5 minute jog if I’m running late!) to the Pole Studio, Fresh Choice (the supermarket open til midnight) and Mediterranean Market, a gourmet supermarket. The lodge is also only 10 minutes from Shotover St in the other direction.

Back of The Remarkables Ski Field in the Distance

I met up with Sandy and her new Queenstown friends for drinks and dancing all night at Tardis and Debajo and enjoyed an afternoon of sun bathing by the lake! Queenstown welcomed me back with 20C afternoons and bright sunny skies!

I looked into mountain bike trails, and am keen to buy a used bike when I return at the end of October!

Ann, Claudia and Sarah (and Al of course) were the only co-workers left up at Good Group when I went to the office to visit! When I walked past the bars I didn’t even recognize anyone! Yikes! Time to make new friends when I spend the month of November!

Well-deserved Ferg Burger after Dancing at Debajo until 4am!

Two new additions to town are Gasoline Alley, a bar by the wharf which features pole dance performances by students from the studio on Monday, Wednesday and Friday nights, and the Ferg Bakery, for your late night pie fix! The venison and portabello is quite tasty – yum yum yum!

I decided to try the Holier Than Thou (Tofu) burger with the toppings from the Bun Laden (Falafel) Fergburger, after a night of dancing to drum and bass and house music! I haven’t had the chance to dance to music like this since… last time I was in Queenstown. I love it here!

I also managed to catch the Australia vs USA game at the Cowboy Bar, a bar which had opened just weeks before I left Queenstown last year. Can’t beat $3 draft beer, a saddle for a bar stool, and a bunch of rowdy Americans and Aussies!

I’m excited to return for the month of November! See you then, Queenstown!

Went to the weekly Auckland couch surfing happy hour at Bungalow 8 near the harbor downtown with my host, Chris, and fellow surfers, Elly and Muriz. All couch surfers get a free tap beer, house wine or vodka drink before 9pm, and 2-for-1 appetizers! END_OF_DOCUMENT_TOKEN_TO_BE_REPLACED

This morning we drove down to the Corona Del Mar State Beach to see the tide pools. Waves crashed over the shallow rocks, home to hermit crabs, snails, urchins, and the carcasses of rock lobsters washed up with the seaweed! Crazy swirls in the sandstone and hanging flowered plants rested above the caves. Shells and rocks with interesting patterns of holes were evidence of a lively marine ecosystem. Pelicans perched on the rock arch in the ocean looked out over their territory regally.

END_OF_DOCUMENT_TOKEN_TO_BE_REPLACED

Today I went for a hike with my couchsurfing host, Tom, through the hills above the coastline of Orange County. Crystal Cove State Park houses a canyon with about a thousand foot rise above the sea level on its ridges. The park is just north of Laguna Beach and just south of Newport Beach. Our route through the park took us up No Dogs, down Pole, along the path through the center of the canyon, up the steep section called Elevator, then circled south and west along Moro Ridge with a view of the ocean and coastline. Our journey was somewhere between 7-8 miles and took just under four hours including a half hour stop for lunch. 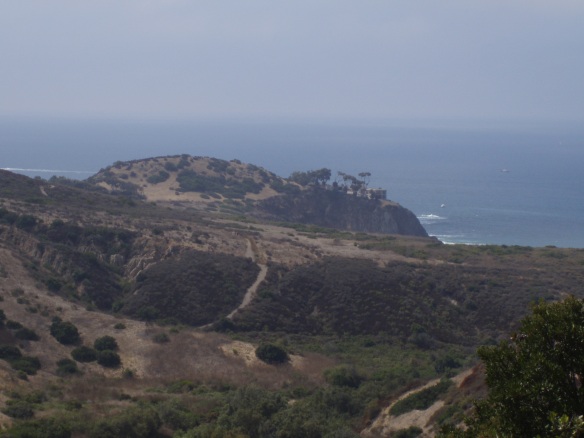